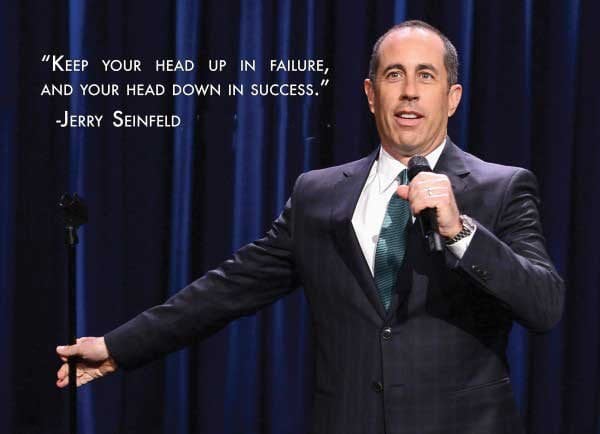 If you’ve spent any time around me in person, you know I quote lines from Seinfeld routinely. To me, Seinfeld is a pure genius, and my “star-struckedness” is due to I started following him as a struggling stand-up comic in the early 80s, long before his show hit NBC.

He was quick, he was whiny, and he often would give the best lines in the show to his fellow actors.

It wasn’t that he was selfless, he understood the big picture.

Seinfeld was once asked by a struggling comic for a piece of advice to help reach success in stand-up comedy. Jerry told him to go to an office supply store and buy himself one of those big desk calendars. If you can, get one of those big ones you hang on the wall where you can see every day of the year.

Oh, and a red marker too.

This is how Seinfeld became the Comic King? A calendar and a sharpie?

Seinfeld told the young comic to write every day.

That is the secret.

Not a few times a week, but every day. Every. Single. Day.

I’m adding this in here but a minimum of 500 words, then face your calendar and put a big fat red X for that day.“

Don’t break the chain,” Seinfeld continued. “Doing this got my routines razor-sharp, kept my creativity flowing when I needed lots of it, and this ensured I was **on** when opportunity knocked at my door.”

You may not be a copywriter and wonder why you should write? Because you should. Writing every day makes you a sharper person. As a marketer, it will improve you beyond imagination.

And get this, you don’t have to publish it, just write! But, if you do publish it, you could parlay it into a new or better career just like Colin Theriot did.

Even if this improves you by 1% per week, compounded, you are doubling your efforts by nearly 100% every year. That’s power.

Write every day without fail. Just do it.

P.S. “But are you master of your domain?”

P.P.S. Don’t get a cheap, thin calendar, so when you put in your “red X” the sharpie bleeds to whatever is behind it.