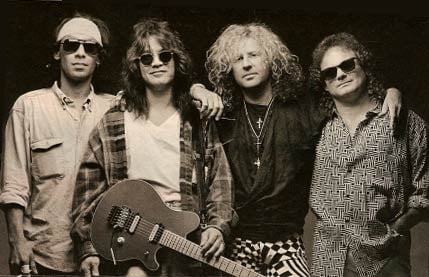 Back in the early 90s, when Grunge was taking over the music space, Sammy Hagar, the then front-man of Van Halen, admitted he was nervous and insecure.

He thought Grunge would be the death of Van Halen and the life that he had built over the past two-plus decades.

The way he saw it, there were three choices to handle this threat to his way of life: do nothing, run from it, or take it head-on.

This was when Alice in Chains just came on the scene with their first album and took the world by storm with their hit “Man in a Box.”

Hagar called them up and invited them to open for Van Halen on their upcoming tour.

They, of course, agreed.

The result? Van Halen became bigger when no one thought it was possible. Alice in Chains fans came out and became Van Halen fans and vice versa.

Oh, and Sammy and Jerry Cantrell, Alice In Chains’ lead guitarist and vocalist, became great friends. Cantrell heads down to the Cabo Wabo for Sammy’s birthday bash EVERY YEAR (well, when we aren’t in a pandemic lock-down).

Stop avoiding your insecurities and meet them head-on. And just maybe, you can be as cool as Sammy and rocking in your 70s.