We know the value of your own PBN or access to a private PBN to help your rankings, but what do you do when you just want a link push without the hassle of getting more expired domains? You just want some nice authority? Since Text Link Ads and the other big brokers are mostly dead, what do you do?

Anyone who tells you link buying is dangerous is a white hat SEO that is making zero money. As long as Google has been in business, links have been the Magic Bullet for rankings. Some say that links are just like a commodity, bought, sold and traded in the open market.

Back in the day is was paying to get into directories. Mainly Yahoo! and LookSmart. Both were $199 one-time fees (their prices went up and changed to annually). The Yahoo! listing got you top listing in Yahoo! (duh) and the LookSmart listing gave you a top listing in MSN (pre-Bing). So a $400 “buy in” got you instant organic traffic.

Then when Google came along, and Yahoo! increased to $299 a year, everyone stopped using Yahoo! for search and started using the upstart Google. Yahoo! cashed in because companies would get their site listed in the Yahoo! Directory as they knew it would increase their rankings in Google.

In the mid-2000s the link buying craze started, and by 2009 it was in full swing. Text Link Ads, LinkWorth, Review Me and a handful of other companies would rent links monthly. It was to the point where you could dump $10k on links with a particular anchor text and in 10 days be #1 for that term. It was insane, but awesome at the same time.

And yes, there were those that didn’t buy links because that would “get them banned.” I have news for you. Those people were right. Buying links will eventually get your site banned, but it takes some time. For example, my most profitable group of sites grossed over $7m from 2009-2012, and they all got whacked by Google.

Does that scare you into never buying links again? Let me repeat that the sites grossed $7m in affiliate commissions during that three-year span. That is the great part of this business: you can build a site up, rock the market, and then have it all burned to the ground. Most people would flinch over that; people like us love it. Because now we have more experience so we can build a BETTER site than we had before, and now we have a budget of a few million dollars to make it with. 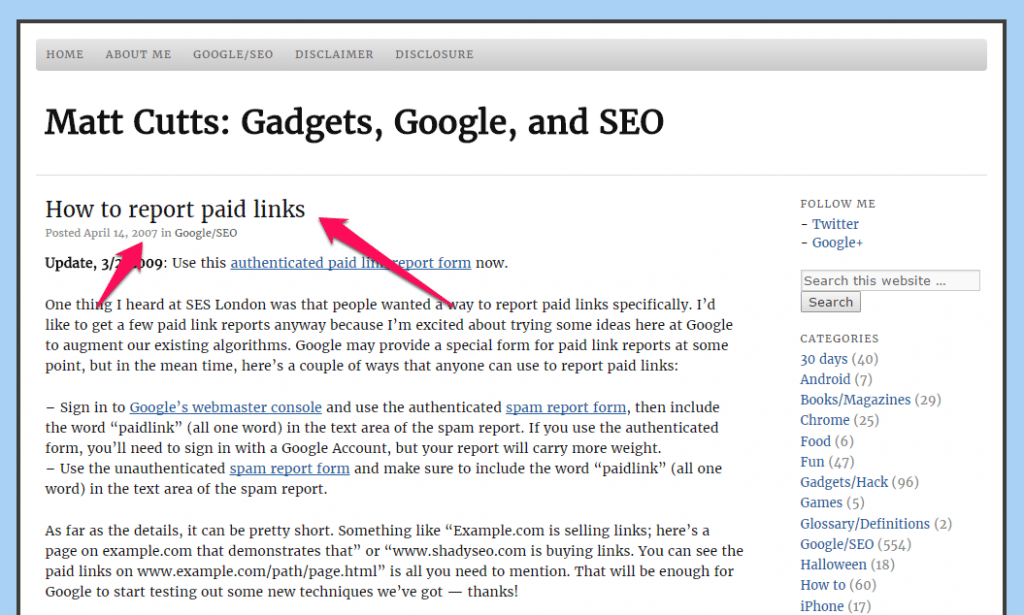 Remember when Matt Cutts even asked people to report others who were buying links? How Matt’s team would find footprints and then just massively deindex the sites selling the links? It was insane. What was worse was these deindexed sites, which still had PageRank, would still sell links through brokerages to get revenue before the next PageRank toolbar update. That was scammy if you ask me…selling links on a KNOWN deindexed site.

So what happened? “Buying Links” went underground and the most notable method was “Guest Posts.” Just do a search in Google for “buy guest posts, ” and you are going to find a ton of sites with offers, and most of them not too good. Huffington Post and some other huge content sites got into the mix “hiring” writers to post content, but what was not disclosed was the content that was posted would not receive any linkage from Huffington Post, therefore, the page, while on Huffington Post’s site, was worth zero in terms of authority or ability to increase search engine ranking for the site the page linked to.

The scam went so far as these “writers” would charge $400 to get an article “posted” on Huffington Post and thousands of people fell victim to the scam.

Then there is the Russian network that controls a few thousand hacked sites which will sell you links for just about everything, and by that we mean everything. A few years ago Google found a footprint with SAPE and killed off the links they were sending.

Then There is Outreach

This can be, no, that’s a lie, this is a huge pain in the ass as it requires you to email ten gagillion website owners asking if they could post your shitty content on their site with a link back to you. Most webmasters don’t respond, and the ones that do, the negotiation period is brutal at best.

I can tell you without exact numbers when I did outreach, 80% of the sites I contacted never responded. And usually, the ones that you want to respond are the ones that don’t.

With 2018 coming around the corner, we will be updating our strategies for how to take your link building to the next level. Stay tuned!

If you want a jump on the year ahead and an extremely powerful backlink in the process, read my “Holy Grail” story.