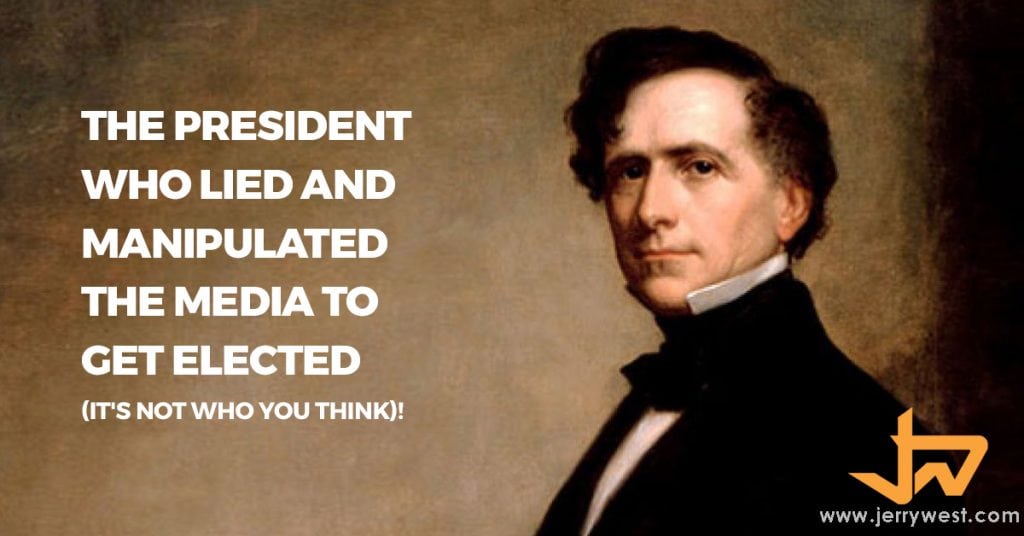 Last week while briefly vacationing in the Northeast and eating my body weight in lobster (because I can), I was searching out some historical sites to see, and my jaw dropped.

The home of Frankin Pierce, the 14th President of the United States.

Unless you’ve been following me for awhile, you’ve probably never heard of him. Spoiler alert: He was a piece of shit president, probably the worst in the history of the United States, however, he has probably the greatest story of becoming president.

And in lies a marketing lesson which you can use.

I must say the tour of the home was fascinating and I drove the tour guide crazy because I knew a lot about Pierce – even the good stuff. Of course, all they wanted to talk about was the good stuff. More on that in a minute.

Pierce had to endure a lot of hardship in his life. While I was aware he lost all three of his children to death before they became adults, I did not know one of his children was decapitated in a train accident, and his wife witnessed it.

That’s rough, to say the least.

So, how did Pierce get to be president anyway? Well, it took 49 ballots for him to win the Democratic nomination. Primarily because no one had heard of him. He was a clear definition of a “dark horse candidate.”

While winning the nomination was a great accomplishment, winning the Presidency would need something big. He had to do something to be known. Get the word out. The problem was there was no TV, no radio, and, of course, no internet back then. The town crier had a range of about 50 yards, so he was out. Newspapers at the time were only local, so that wasn’t an avenue he could afford to use.

Then there were books. In his day, books were everything. Now, it is one thing to write a book, but it is quite another to get someone to read it. He knew if he were going to write a book and get people to read it, it would hinge on who wrote the book. Or, in other words, who is telling the story. Pierce decided he would call up his old college drinking buddy. And who was his old college drinking buddy?

If you don’t know who Hawthorne is, shame on you. In his day he was the biggest pop culture icon. He was coming off back-to-back best-sellers, and everyone wanted to know what he was going to write next. His next book would go on to be a best-seller too.

The Life and Times of Franklin Pierce.

It should be noted, that just like today, this story of Pierce should have had the disclaimer “Based on a True Story” because much of what Hawthorne wrote could be best described as “flowery prose woven with fiction.” Hawthorne painted Pierce as a combination of the compassionate Mother Theresa and charismatic James Bond. Pierce was neither.

But because of the popularity of the book, the majority of Americans believed it, and Pierce had one of the biggest landslide victories in US history becoming the 14th president of the United States.

The result? Pierce sucked. His pro-slavery stance and lack of leadership ability paved the way for the Civil War because he caused a severe divide between the North and the South. I hear you, a lot of Presidents suck, how is Pierce the worst?

How did he take the news? Well, he was a raging alcoholic and also beat his wife from time to time (details left out of his book, surprise, surprise). When he was told he couldn’t run for a second term, he got plastered, got on his horse and proceeded to run over a woman. That’s right; Pierce became the first president with a DUI.

Now, speaking of his drinking, the tour guide went on a long rant about all the myths of “Handsome Frank” as she referred to him. One of the myths was that he had a severe drinking problem in the White House and she told stories on how he wouldn’t drink at dinner parties; his wine glass would always be turned upside down, and how he would never drink when his wife Jane was around. Of course, I had to tell the “ran the woman over with his horse while drunk” story and she went ape shit. One of my finer moments.

So, what is the takeaway to all of this? It is simple really. How many pieces of shit marketers do you know? How did they get their following? The “industry celebrities” how did they get their status? Someone of power and/or influence told their story. Look at Dr. Oz. Do you think if anyone else besides Oprah told his story he would have the following he does? Nope.

This is how you become great and get a killer following. Get the right person to tell your story. People will eat it up and immediately trust you because they trust the person telling the story.